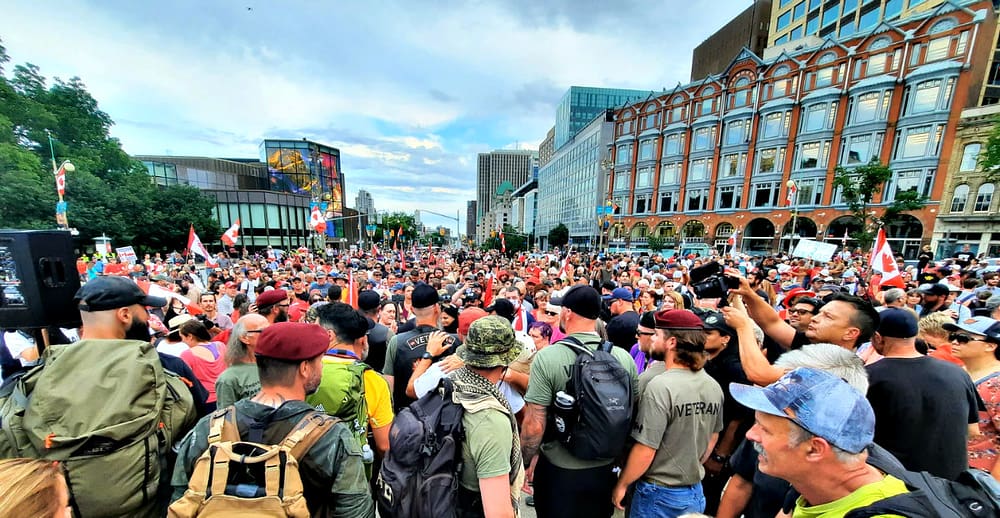 James Topp is a true fighter for our liberty and a peaceful warrior marching to bring more attention to the deceptive ‘official’ narrative and total scam of the C-19 hoax. And the overreach of the government with their unlawful mandates.

The Ottawa rally for the Canada Day weekend saw tens of thousands of supporters turn out for the event. And many more greeted them along the entire journey.

Dr. Paul Elias Alexander walked with Veteran James Topp on the last day of the march to arrive at the Tomb of the Unknown Soldier in Ottawa, Canada where James Topp delivered an emotional speech about healing the country.

The usual suspects – legacy media – gave Topp’s march little coverage and the spin they broadcast was despicable even for puppet journalists.

Watch the video and you be the judge.

Take up the challenge! It isn’t easy – it’s hard work. Get to it!

Lean into it and stand up for the principles that made this country great. And DO NOT COMPLY with the corporate buffoons from the WEF pulling the strings of the political puppets who think they can turn our country into and camp of slaves.

United peaceful non-compliance will win in the long term.

Did the march make a difference?

Warrant Officer James Topp, a 28-year veteran of the Canadian Armed Forces who set out in February of this year to march from BC to Ottawa in protest of the covid mandates that are being imposed on many Canadians.

James shares his view on the success of his long-anticipated meeting with MPs and what he hopes to achieve for all Canadians’ freedoms.